The 9th Odesa International Film Festival, which took place from July 13 to 21, sums up its achievements 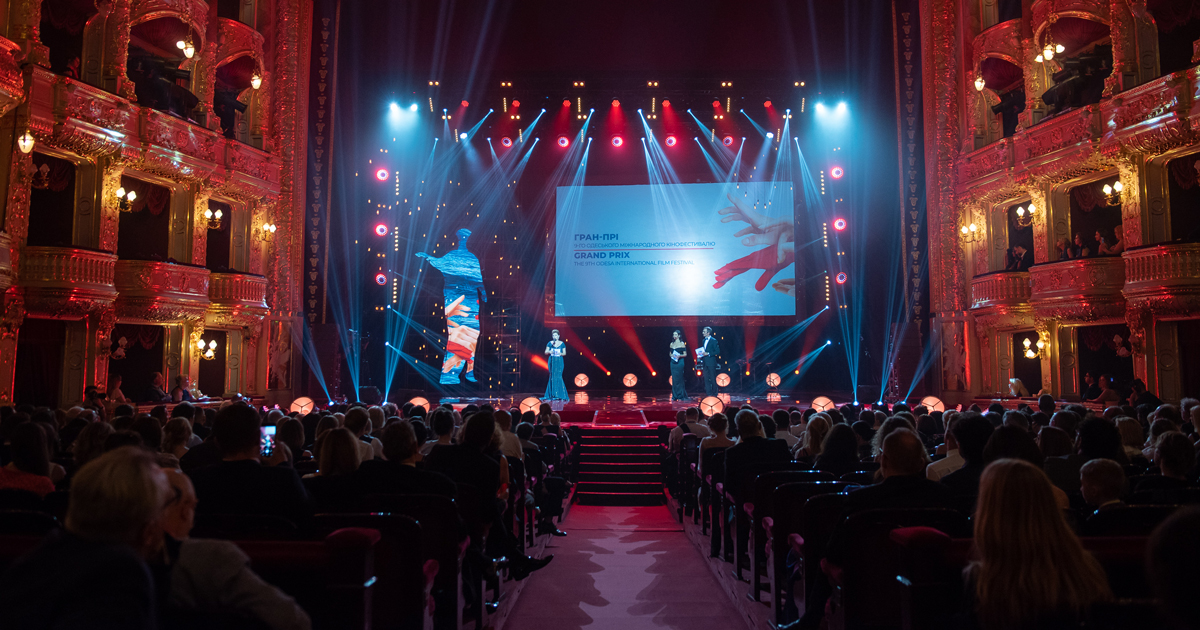 This year, 1070 films from 95 countries were submitted for participation in the competition programs. 12films from the International Competition competed for the main prize – the Gran Prix; 5 features and 13short films participated in the National Competition, and 8 – in the European Documentary Competition. In total, 108 films and series were shown in the competition and non-competition programs of the festival from 41 countries in Europe, Asia, South and North America. The shortest film was 8 minutes, the longest – 234 minutes.

In all competitions – International, National and European Documentary – a total of 38 films participated, and 20 of them (53%) were made by female directors. In general, all competition and non-competition programs of the festival featured 39 films by female directors. The overall audience of OIFF amounted to 150,000 viewings. Live broadcasts of Festival TV (provided by TENET-TV) were seen by thousands of people across the country.

Traditionally, there was an open-air cinematic performance on the Potemkin Steps accompanied by a symphony orchestra, which gathered more than 15 thousand spectators. The residents and guests of Odesa enjoyed a screening of the black-and-white film “Safety Last!” by Sam Taylor and Fred C. Newmeyer. Open-air screenings were also held in the Green Theatre – in particular, the screening of the new restored version of “2001: Space Odyssey” by Stanley Kubrick in the 4K format, which was released in honour of the 50th anniversary of the film.

In the hall of the Odesa Opera House during the opening and the closing ceremonies, and at the Festival Palace, during the entire run of OIFF a place was reserved for the Ukrainian director Oleg Sentsov, who began an indefinite hunger strike on May, 14, demanding the release of Ukrainian political prisoners who are detained on the territory of the Russian Federation and Crimea. Also, the videos in support of Sentsov were shown before the screenings of all films of the film festival.

Kira Muratova’s films were shown within the framework of the 9th OIFF in honour of the director’s memory. We remind you that almost 2 months ago Kira Georgievna has passed away at the age of 83.

During OIFF-2018, 2 Golden Dukes were awarded for contribution to cinema: one to the honourable guest, Ukrainian actress Ada Rogovtseva at the opening ceremony, and one to the special guest, British actress Jacqueline Bissett at the closing ceremony.

“Every year the Odesa Film Festival conquers new borders and becomes larger and more exciting,” says Viktoriya Tigipko, President of the Odesa Film Festival. “OIFF has already firmly established itself on the world stage, the best filmmakers in the world come to us. This year has not been an exception – such luminaries as Jacqueline Bissett, Naomi Kawase, Dani Lavant, Eric Roberts, and many others came to Odesa. Our anniversary 10th film festival is next – and it will be spectacular! So we hope even more star guests will visit Odesa!”

The Film Industry Office section has gathered around 600 film professionals from around the world. During its 4 days there were presentations, panel discussions and networking meetings; the first “Cinema: Backstage. Gender equality – myths and reality” conference was held at the event. 11 projects were presented within the framework of Pitching, 12 at Work in progress, and 6 at Odesa IFF ScriptEast Series Projects. For the second time, OIFF hosted Actor’s Workshop for 11 Ukrainian actors and actresses. Instructing the course, just as last year, was actor and director Ivan Shvedov. More than 500representatives of distribution companies and Ukrainian cinemas, as well as film studios and other companies providing services in the film industry, participated in the Summer Film Market of OIFF.

“Every year the Odessa Film Festival receives more and more applications for participation in the competition programs from almost every corner of the world. It is very gratifying to see that the number of films from Ukraine is increasing every year. After all, the Ukrainian film industry is becoming part of the European and world film markets – and the Odesa Film Festival is the engine of this integration,” says Julia Sinkevych, general producer of OIFF. “Our mission is to develop national cinema, to shape this cultural stratum and the tastes of our mass audience. It feels good to see full auditoriums at the screenings. But we do not want to stop at what we’ve achieved – we have very ambitious plans for our 10th anniversary festival!”

For the second year in a row, the Odesa Film Festival presented a powerful business program. Traditionally, the closing event was a closed business meeting of the private tech investors' club iClub Grand Meetup. The meeting took place for the third time within the framework of OIFF. The event included the speeches of the President of the OIFF, the managing partner of TA Ventures Viktoriya Tigipko, the Managing Director of the EBRD in Eastern Europe and the Caucasus Francis Malige, Regional Director (SME Financing and Development Department in Ukraine, Moldova, Belarus and the Caucasus) of EBRD Denis Torkhov, Managing Partner of EVRIS Law Firm Igor Kravtsov, CEO of Genesis Volodymyr Mnogoletniy, Vice President of Readdle Denis Zhadanov, owner of investment company Freedom Finance Corp Timur Turlov, OIFF special star guest of the event actress Jacqueline Bissett. Over 200 investors, innovators, business representatives, cinematographers, etc. were present at the event. The business meeting was sponsored by the venture fund TA Ventures, TASKOMBANK, and the legal partner of iClub the law firm EVRIS, while IL Decameron Clubhouse Odessa not only hosted the OIFF guests, but also became the venue for iClub. The official restaurant partner Elissa and the official sponsor of ARARAT treated the guests of the event to food and drinks.

“The Odesa Film Festival develops with each year: we not only develop Ukrainian cinema, but expand into related fields,” said Viktoriya Tigipko, President of the Odesa Film Festival. “For the third year in a row, the Odesa Film Festival has been a platform where business meets culture. This year, a rich and updated business program was waiting for everyone: the closed event “Slova & Friends: Investment Circulation” was held for the first time, the iClub Grand Meetup was held for the third time, which gathered more than 200 businessmen, investors, innovators and cinematographers under one roof. We also raise very important issues of the film industry in a global context: the “Cinema: backstage” conference was held for the first time, which we will continue to hold every year.”

The event featured around 600 press representatives, including from the leading world publications like The Hollywood Reporter, Cineuropa, and others. 200 volunteers helped organize the film festival, among which, in addition to Ukrainians, were representatives from Morocco and the United States.

We remind you that the winner of the Gran Prix of the Film Festival, according to the results of the audience’s vote, was the film “Crystal Swan” (Belarus, Germany, USA, Russia) by Darya Zhuk.

The best film according to the jury of the International Competition Program was “Pity” by Babis Makridis (Greece, Poland). The best picture of the European Documentary Competition was “Home Games” (Ukraine, France, Poland) directed by Alisa Kovalenko. The Golden Duke for the best feature film of the National Competition Program went to “Delta” by Oleksandr Techynskyi, and the best short film of the 9th OIFF was Maryna Roshchyna’s “In Joy”. As of 2018, the OIFF National Competition Program includes an award for best directorial work. The statuette “Duke of OIFF” in this nomination went to Tonya Noyabryova for the film “Hero of My Time”. The prize of 60 000 UAH from OIFF’s Pitching went to the project “Inconvenient Memory” by Ihor Ivanko. The winner of Work in Progress “Censor” (directed by Peter Kerekes) received plane tickets worth €2,000 by the number one airline in Ukraine – the Ukraine International Airlines (UIA), the exclusive airline of the Odesa International Film Festival. Another winner of Work in Progress – “My Thoughts are Quiet”, dir. Antonio Lukich – won a prize from WOG, the official fuel partner. The best project of Odesa IFF project ScriptEast Series was “Family Archives” (Croatia) by Andamion Murataj and Marjan Alcevski, which received a $20,000 worth of post-production services from Star Media. A special award from Series Mania – a personal invitation to take part in the 2019 Series Mania Writers' Campus – went to the project of the series “Smokey Eyes”, (Poland), dir. Małgorzata Piłacińska. The integrity and authenticity of the announced results was confirmed by the auditing and consulting company Kreston GCG, which is the official auditor of the Odesa International Film Festival.

This year, the Odesa Film Festival also underwent innovative changes: together with the company Iwis Ukraine it has developed a new ticketing system that has no counterparts among other festivals in the country. Thanks to the partnership with TASKOMBANK and Mastercard Ukraine, OIFF became cashless territory – the special card “Card OIFF” was issued for this purpose.

The 10th Odesa International Film Festival will be held from July 12 to July 20!